Alice and Bob were peers working on a software project which had International clients and lucrative rewards. When they first joined the project, the expectations from both of them were clearly set. They were expected to develop quality software, based on the requirements from the clients. Both of them always tried to perform to the best of their capabilities.

Alice and Bob were unique in their own ways and had different interests. Apart from development, Alice was a person who liked to spend time in understanding the client requirements completely in order to see the larger picture. She also liked to showcase her work to the clients and other team members. Bob on the other hand was an introvert. He preferred working but not talking about it. If he had even a small amount of time at hand, he would dedicate it to improving the quality of the software by adopting some of the best practices. Both of them always met their expectations of developing high quality software for the clients. 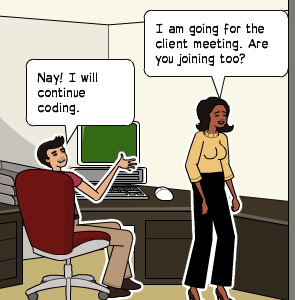 In course of time, the expectations from them changed. Along with development, they were now expected to interact more with the clients and take up more ownership. Alice was already doing some of it because that was something she liked doing but Bob wasn’t. So, Carol, the senior team member, decided to convey this to Bob.

She pointed out to Bob that he wasn’t doing as well as Alice. “Alice is interested in understanding the requirements well. She communicates with the clients, and takes ownership of tasks. You should start doing that too.” 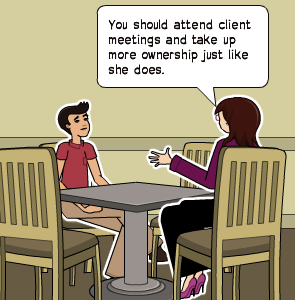 Carol had no intentions of comparing Bob’s contributions in the team with that of Alice’s. Her intentions were to encourage Bob to start moving out of his comfort zone and try out something different that would eventually benefit him and the team. But, in the way Carol conveyed the message to Bob, there was an element of comparison which affected Bob.

Bob, now started putting in effort to break out of his introvert shell and began interacting more with his team mates. He started speaking more about the things he worked on and also put in efforts to interact with the clients. All this was great, except that Bob was not doing this to improve himself but was doing this to show that he was better than Alice. All his energy was channelised to be better than his competitor. He would try to show his work at every opportunity, in order to make others feel he was better than Alice.

A few days later, Bob made a lot of design changes to the software. It improved the software quality to a great extent but it was not something easy enough for everyone else in the team to understand. Alice, who had difficulties figuring out the latest developments, asked Bob to help her understand it better. Bob did help her but he also hid some important information that he felt would give him an edge over Alice. Alice sensed something amiss with Bob’s behaviour, and she also began developing a negativity towards him. 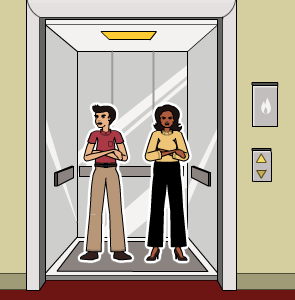 The project was moving ahead as per the client expectations, and most people in the team did not know about the strained relation between Alice and Bob. But, the efficiency of the team would have been much better if they had worked as a team.

It would have been better for Alice and Bob to complement each other and work more on their interests. Alice could have interacted more with the clients and explained the requirements and the larger picture to Bob so that he could understand the domain well enough too. In turn, Bob could have helped Alice understand various ways to develop software better. Both of them would have learnt from each other. There would not be any negativity between them. They and the project would have benefited more.

Why did this not happen and why was there so much negativity?

Was Carol’s feedback the reason?

It is true that Carol could have done a better job at conveying her message by comparing Bob’s work with some concrete expectations instead of individuals. For example, she could have said, “Bob I feel it might be good for you to start looking at other areas like client communication, requirement gathering, etc. I feel you will get to learn new things there and in turn, it will benefit the project.” This doesn’t bring about negativity in Bob towards any another team member and it also gives him an opportunity to express that this might not be something he is deeply interested in doing at this point of his career. But, when someone is compared with other individuals, they can start feeling inferior and could either get disheartened completely, feel demotivated and disappointed or develop competitive attitude and jealousy leading to Bob-like behaviour.

We should all choose our words carefully.

What else could have been different?

Bob could have been a mature professional and believed that Carol had no intention of comparing him with Alice. He could have taken the feedback positively and perceived Alice as a companion and not a competitor. He could have sought help from Alice to sharpen his communication skills and helped her grow in programming as well. They both could have held hands, complemented each other with their unique skills and moved ahead together. This would not only have benefited both of them, but also the project.

You might be faced with such situations many times in you career. The next time you feel like you are being compared to someone else, have faith in yourself and your peer and say “Success lies in Complementing each other and not Competing!” 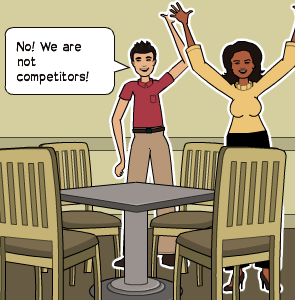 A related post on “Success Isn’t a Competition” can be found here.

An insight into “What makes a Team” can be found here.

Speak up, ask questions, encourage team members to be brave and not perfect

Experience Products the way Customers would during Testing

We as testers should try to experience our products in the way that our end users would experience them. We should think beyond just the requirements and spe...

As testers, we should not just check if our product is as per the design and specifications stated. We need to experience the products in the ways an end use...